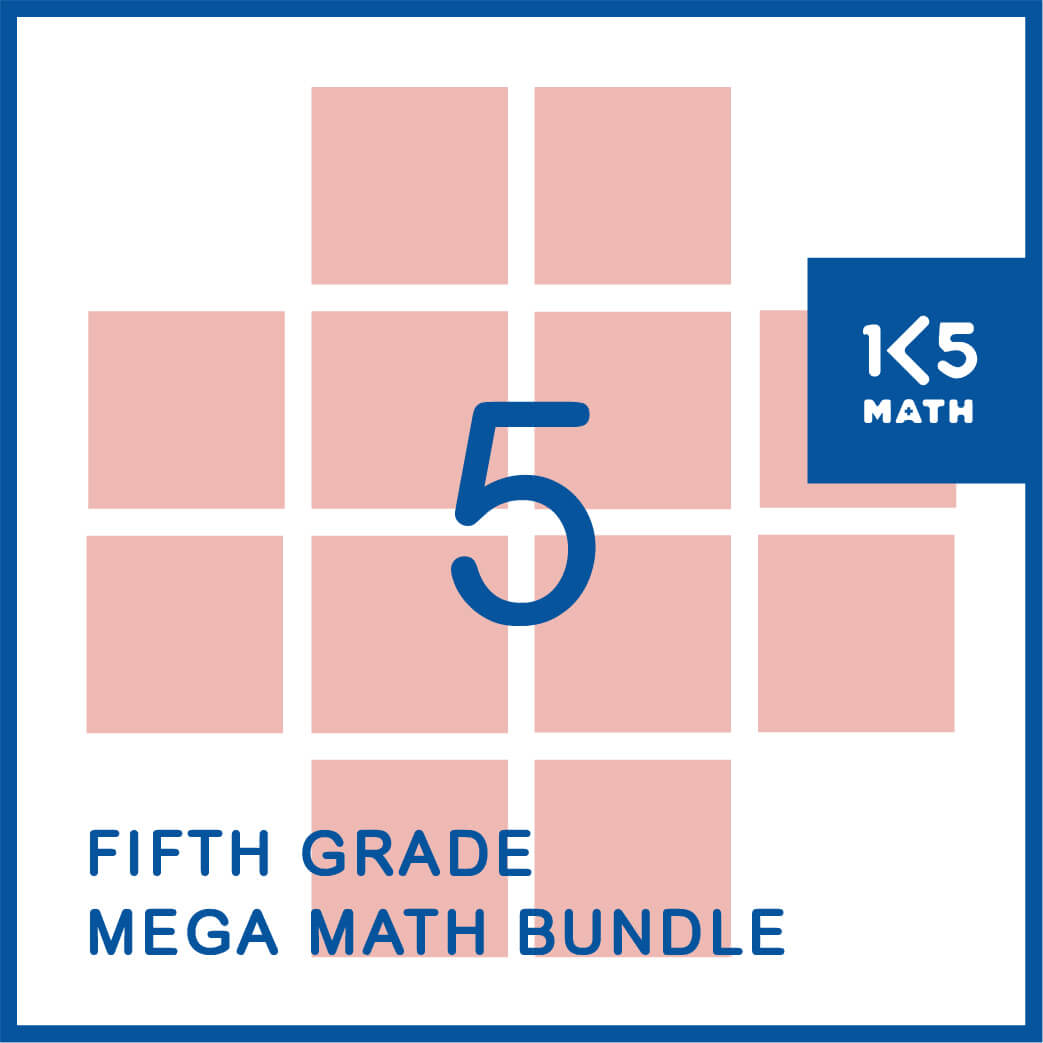 This page provides sample downloads from some of the resources in 5th Grade Mega Math Bundle aligned with the 5th Grade Number Common Core State Standards. Try some of the samples listed in blue below each standard or download the bundle and have instant access to hundreds of easy-prep, engaging resources to simplify your math lesson planning and make active engagement through hands-on math instruction an integral part of your fifth grade classroom.

5.OA.A.1 Use parentheses, brackets, or braces in numerical expressions, and evaluate expressions with these symbols.

What Year Is It?

5.OA.A.2 Write simple expressions that record calculations with numbers, and interpret numerical expressions without evaluating them. For example, express the calculation “add 8 and 7, then multiply by 2” as 2 x (8+7). Recognize that 3 x (18932 + 921) is three times as large as 18932 + 921, without having to calculate the indicated sum or product.

Multiplying a Whole Number by a Power of 10

Multiplying a Decimal by a Power of 10

5.NBT.A.4 Use place value understanding to round decimals to any place.


Roll and Round (nearest tenth)

Literature Link: One Grain of Rice

5.NBT.B.6 Find whole-number quotients of whole numbers with up to four-digit dividends and two-digit divisors, using strategies based on place value, the properties of operations, and/or the relationship between multiplication and division. Illustrate and explain the calculation by using equations, rectangular arrays, and/or area models.

5.NBT.B.7 Add, subtract, multiply, and divide decimals to hundredths, using concrete models or drawings and strategies based on place value, properties of operations, and/or the relationship between addition and subtraction, relate the strategy to a written method and explain the reasoning used.


Dividing Decimals with Base Ten Blocks 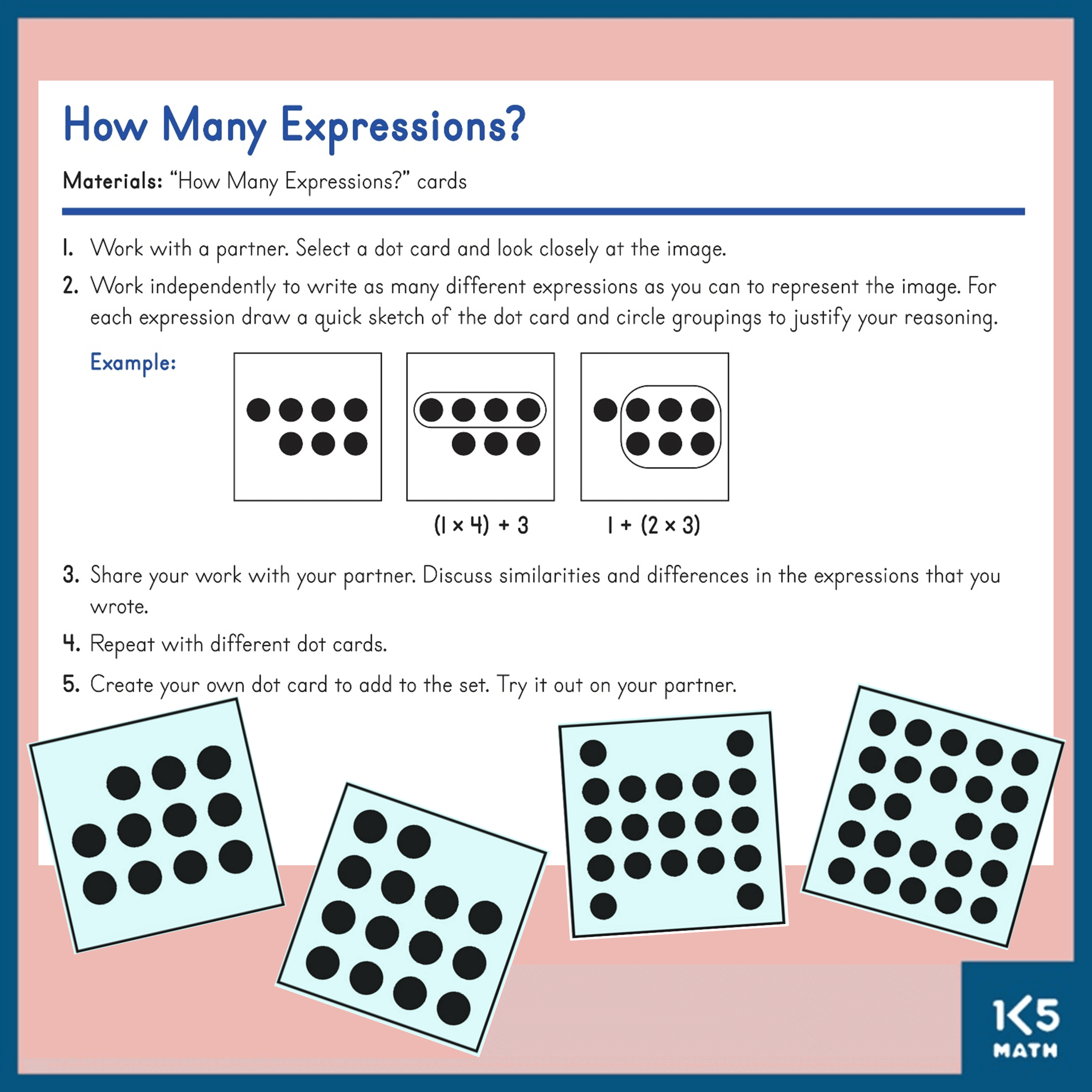 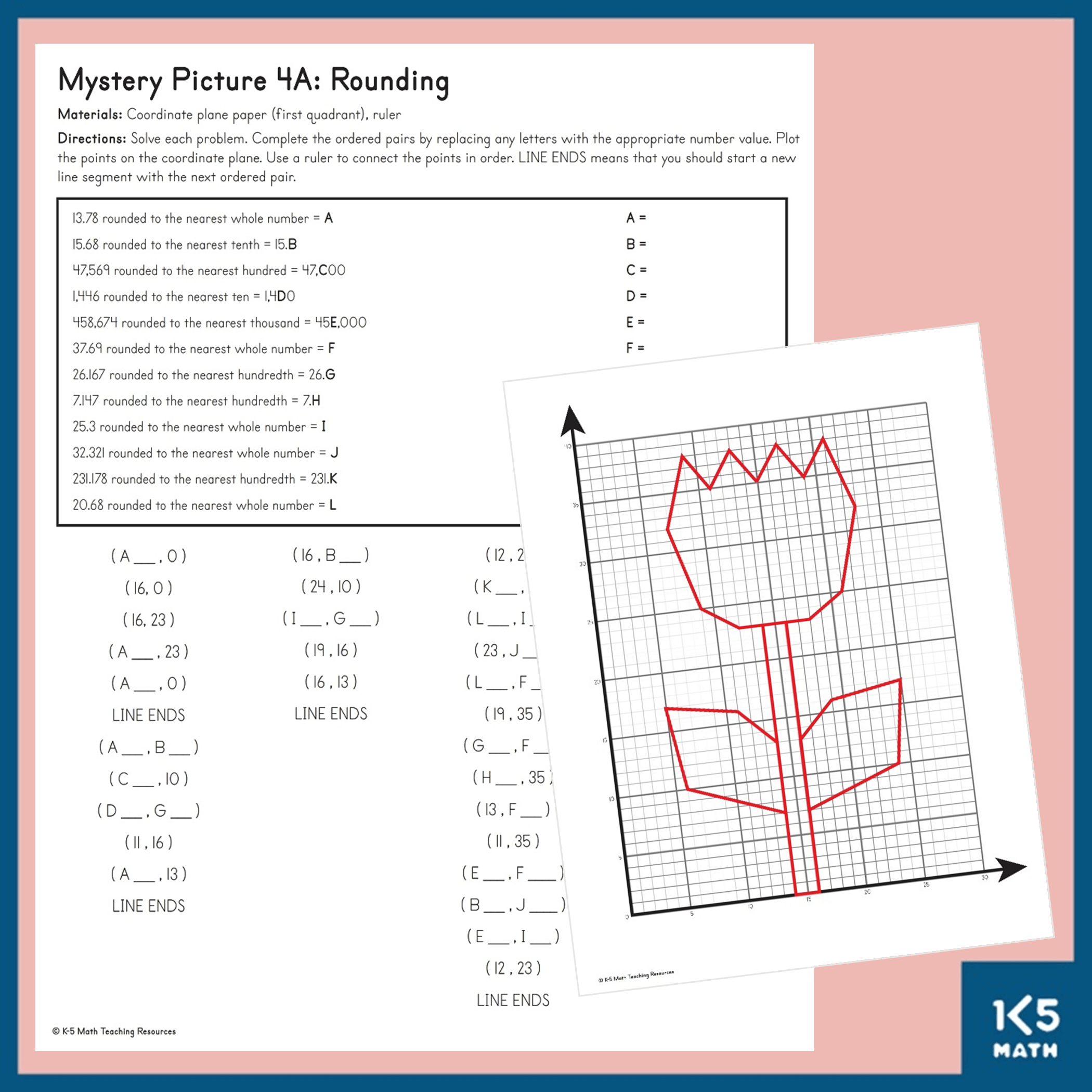 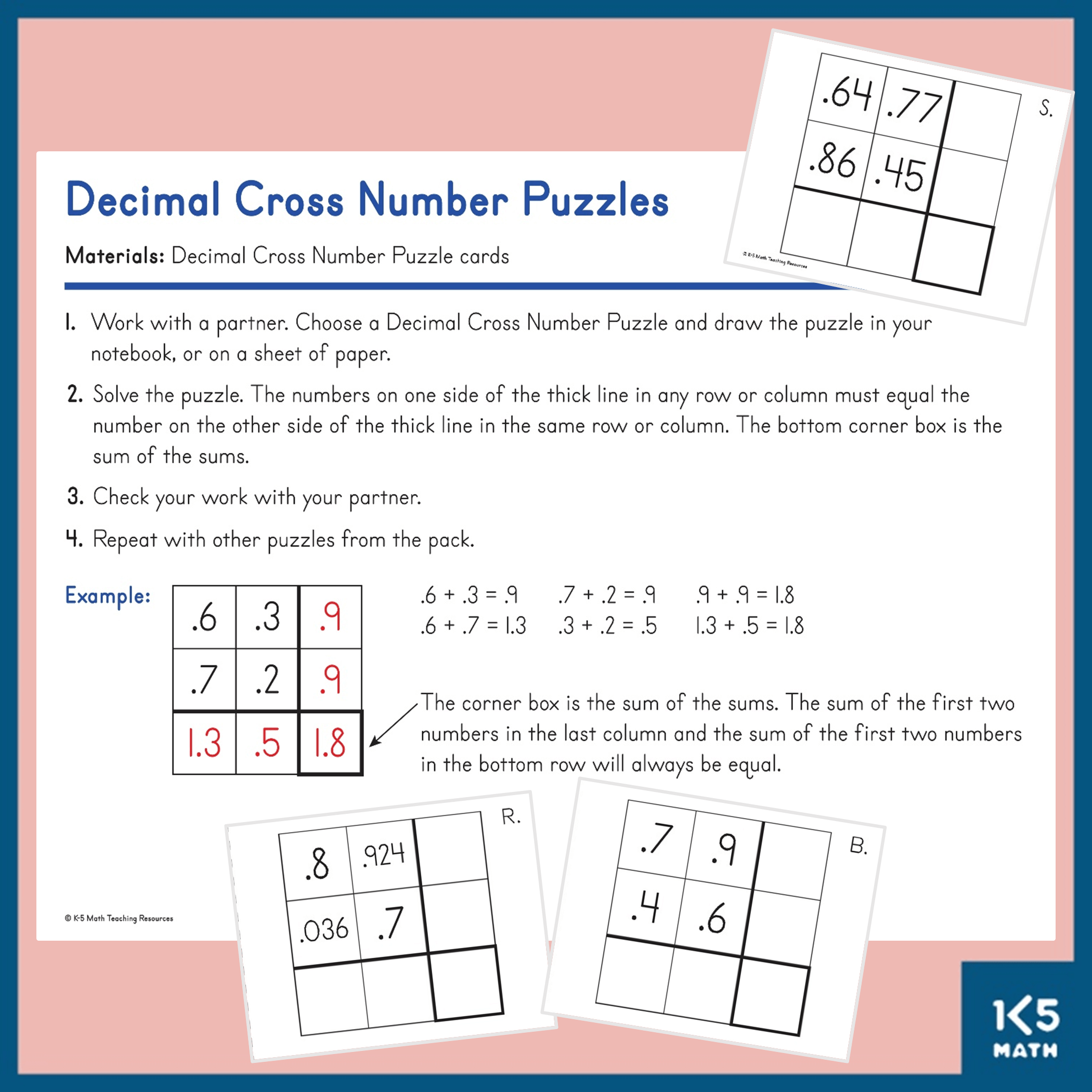 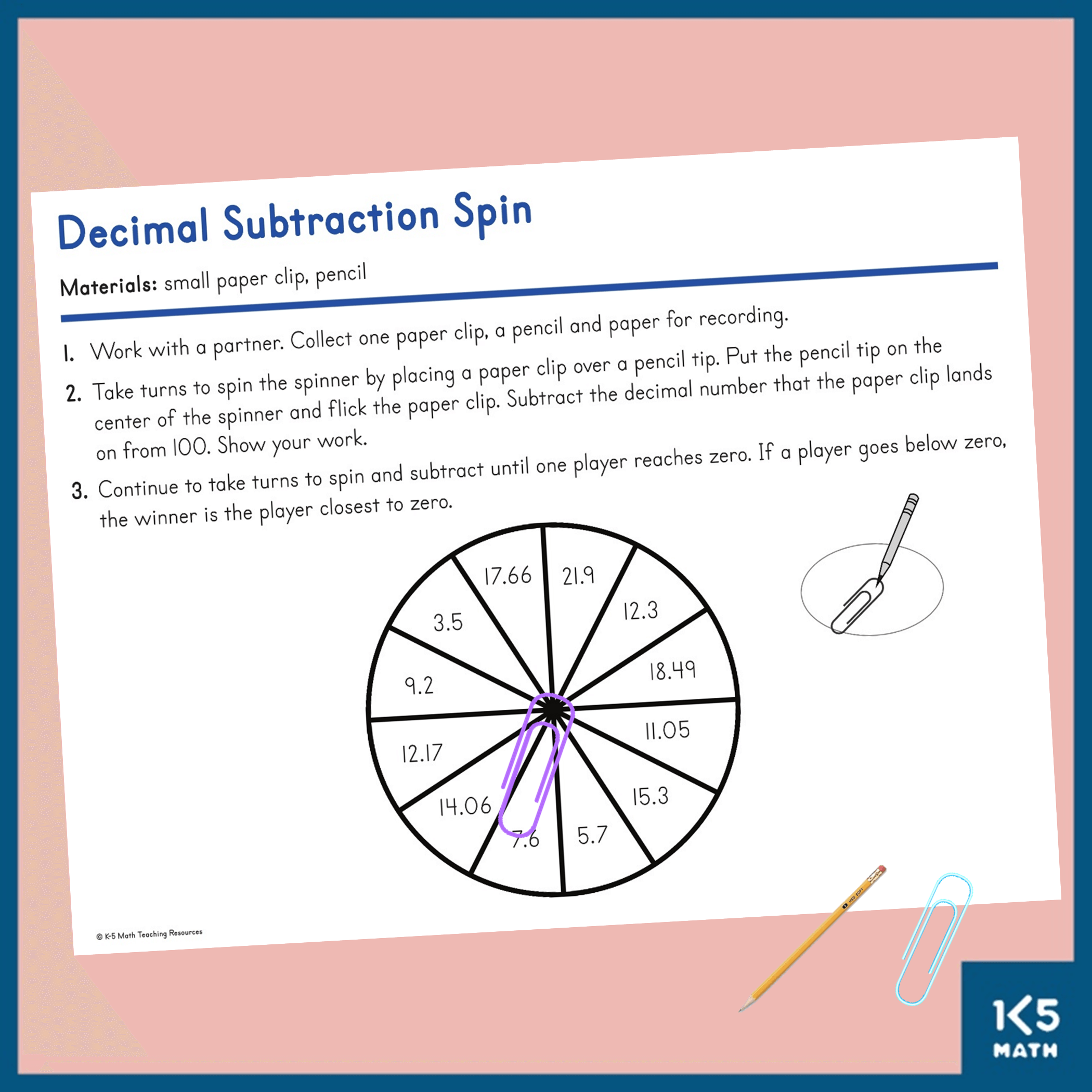 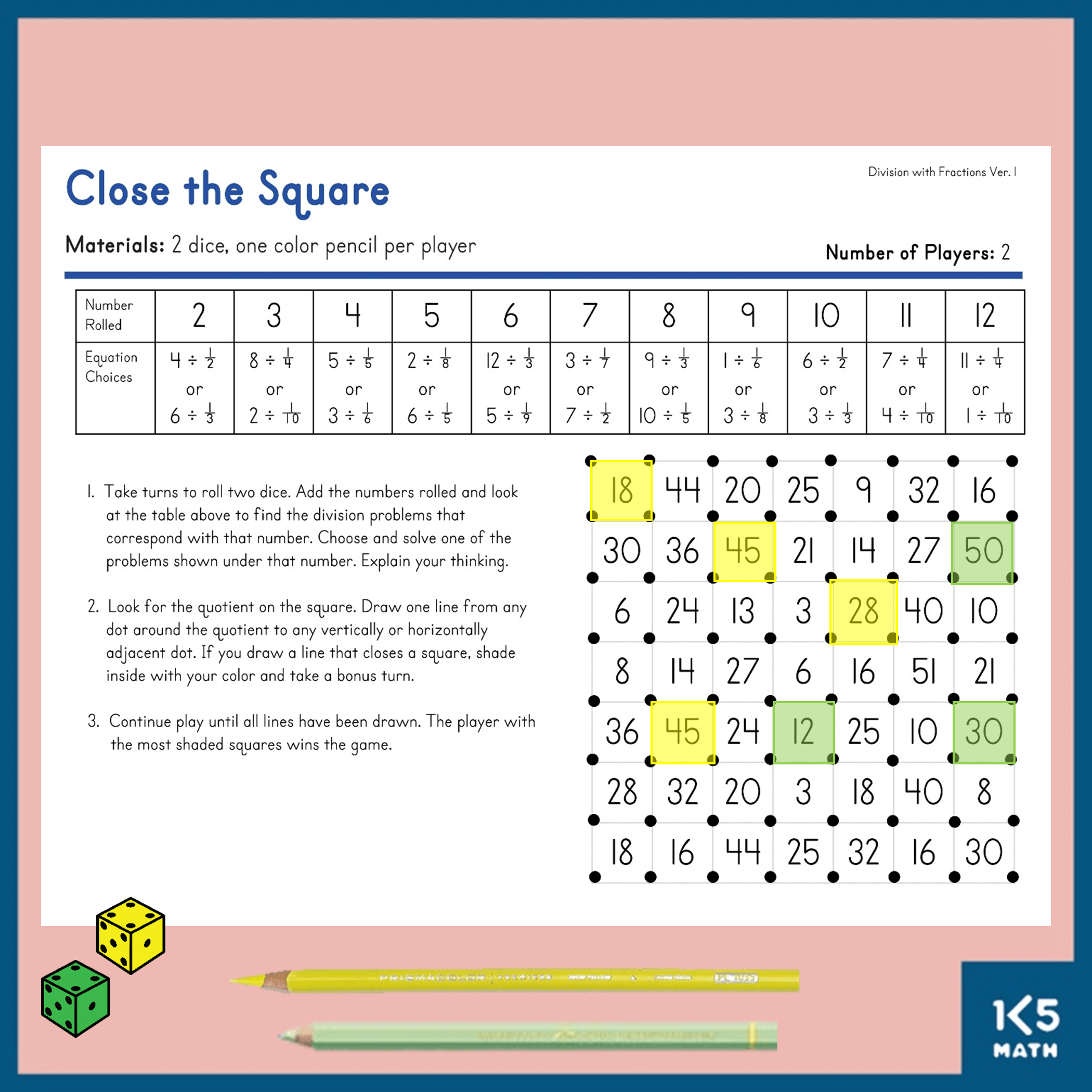 Use equivalent fractions as a strategy to add and subtract fractions

5.NF.A.2 Solve word problems involving addition and subtraction of fractions referring to the same whole, including cases of unlike denominators, e.g., by using visual fraction models or equations to represent the problem. Use benchmark fractions and number sense of fractions to estimate mentally and assess the reasonableness of answers. For example, recognize an incorrect result 2/5 + ½ = 3/7 by observing that 3/7 < ½.

5.NF.B.3 Interpret a fraction as division of the numerator by the denominator (a/b = a ÷ b). Solve word problems involving division of whole numbers leading to answers in the form of fractions or mixed numbers, e.g. by using visual fraction models or equations to represent the problem.

5.NF.B.4 Apply and extend previous understandings of multiplication to multiply a fraction or whole number by a fraction.
a. Interpret the product (a/b) x q as a parts of a partition of q into b equal parts; equivalently, as the result of a sequence of operations a x q÷b. For example, use a visual fraction model to show
(2/3) x 4 = 8/3, and create a story context for this equation. Do the same with (2/3) x (4/5) = 8/15. (In general, (a/b) x (c/d) = ac/bd)
b. Find the area of a rectangle with fractional side lengths by tiling it with unit squares of the appropriate unit fraction side lengths and show that the area is the same as would be found by multiplying the side lengths. Multiply fractional side lengths to find areas of rectangles, and represent fraction products as rectangular areas.

Find a Fractional Part of a Group (v. 1)

Who Has the Longest Line?

Divide a Unit Fraction by a Whole Number

Divide a Whole Number by a Unit Fraction (v. 1)

Divide a Whole Number by a Unit Fraction (v. 2) 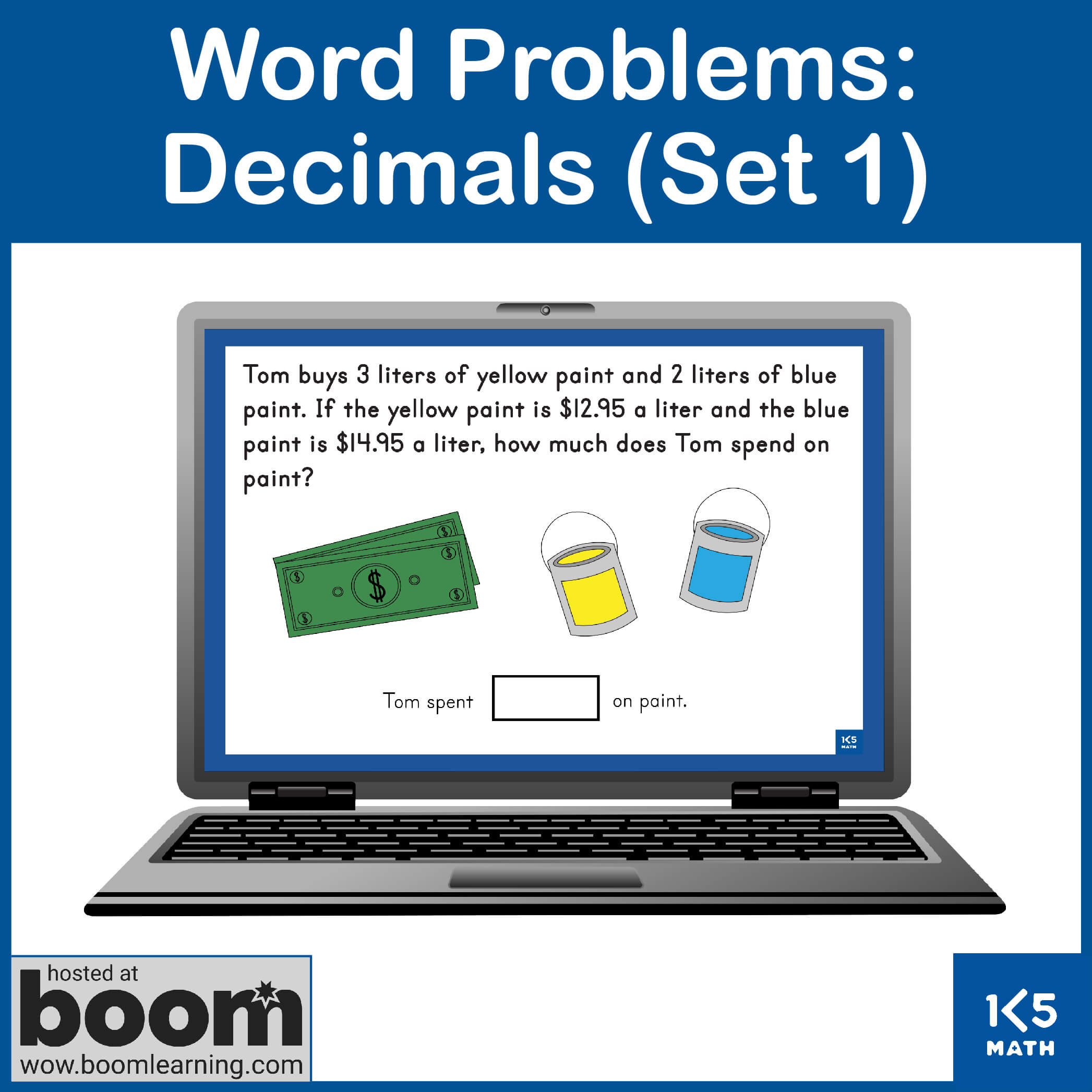 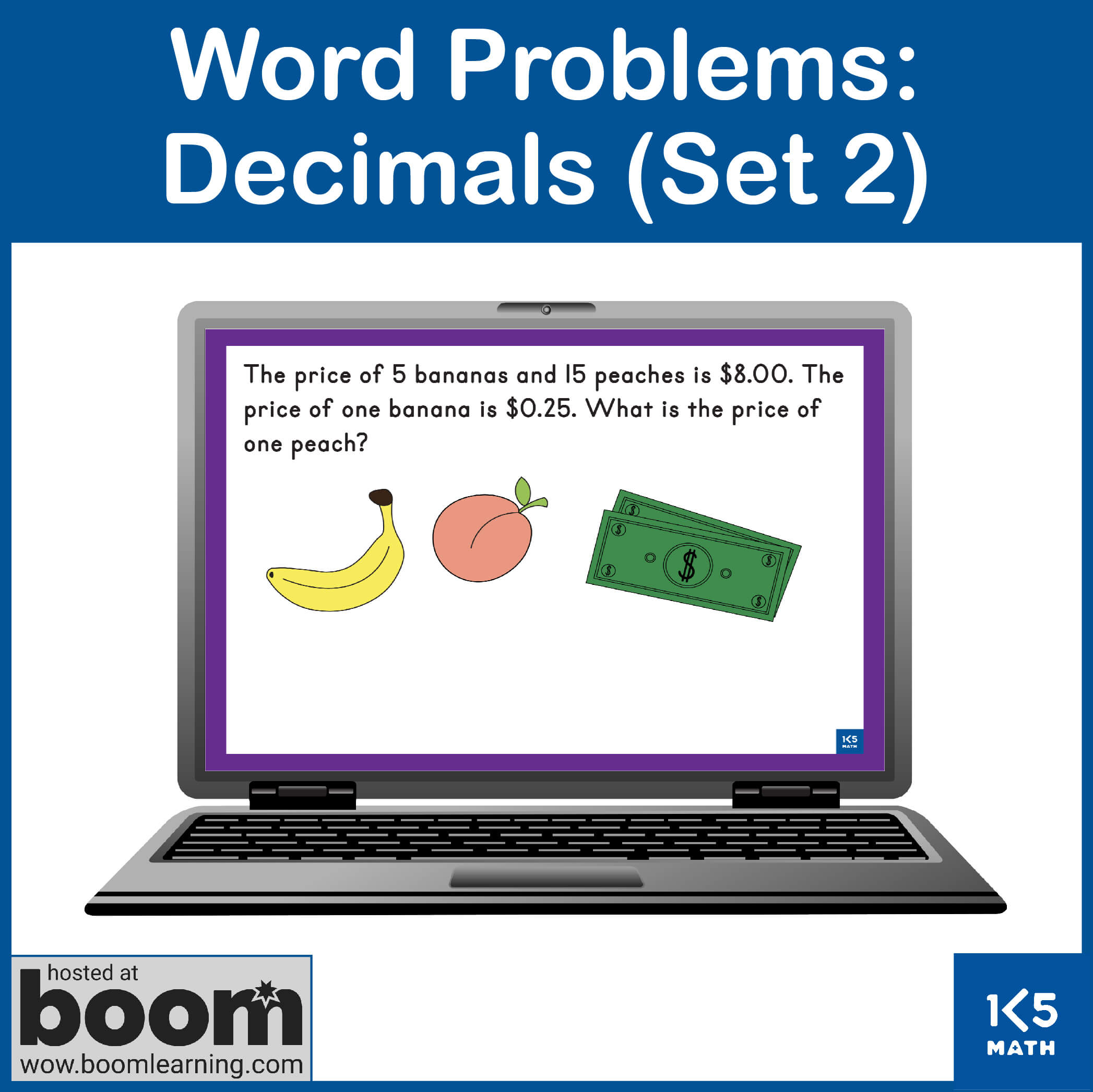 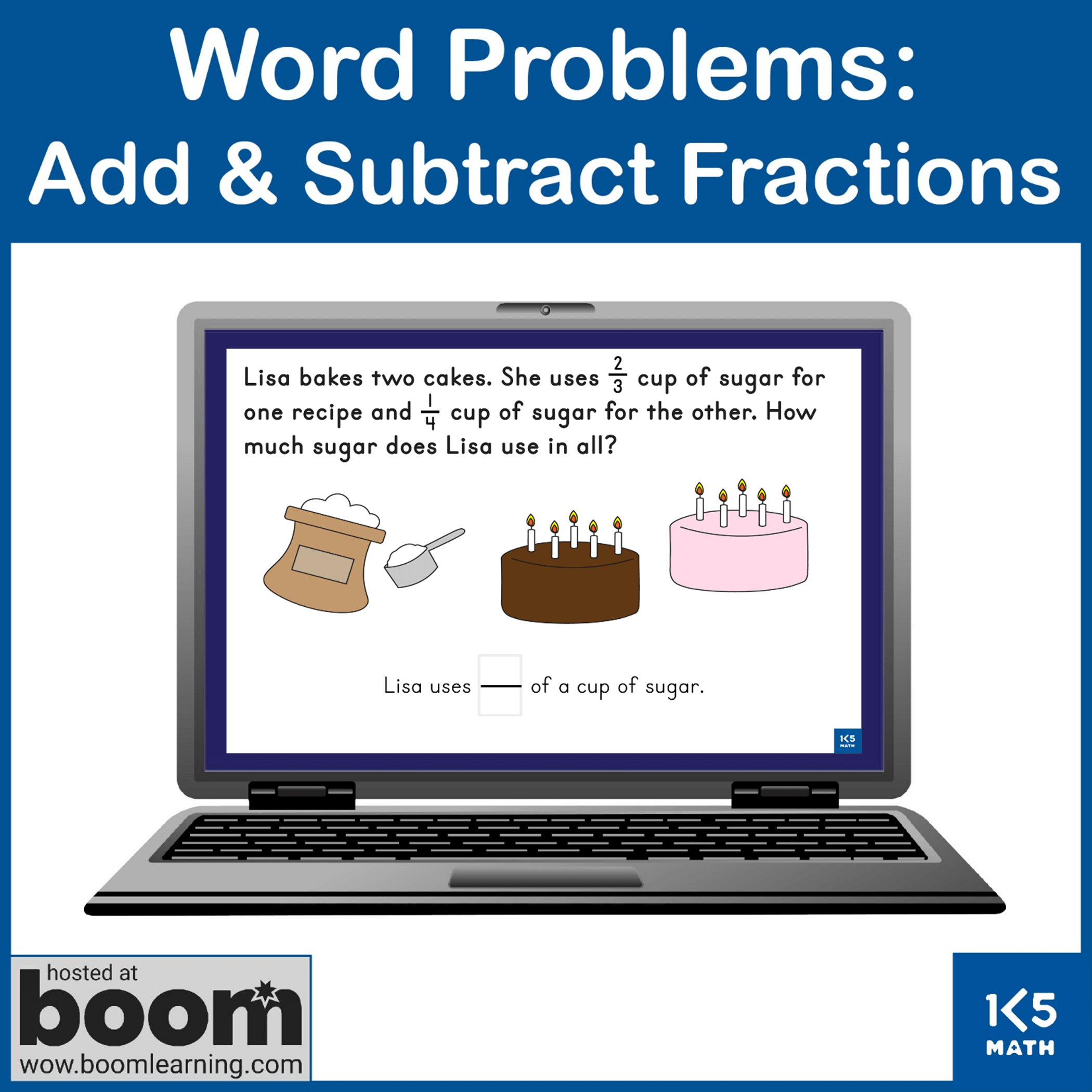 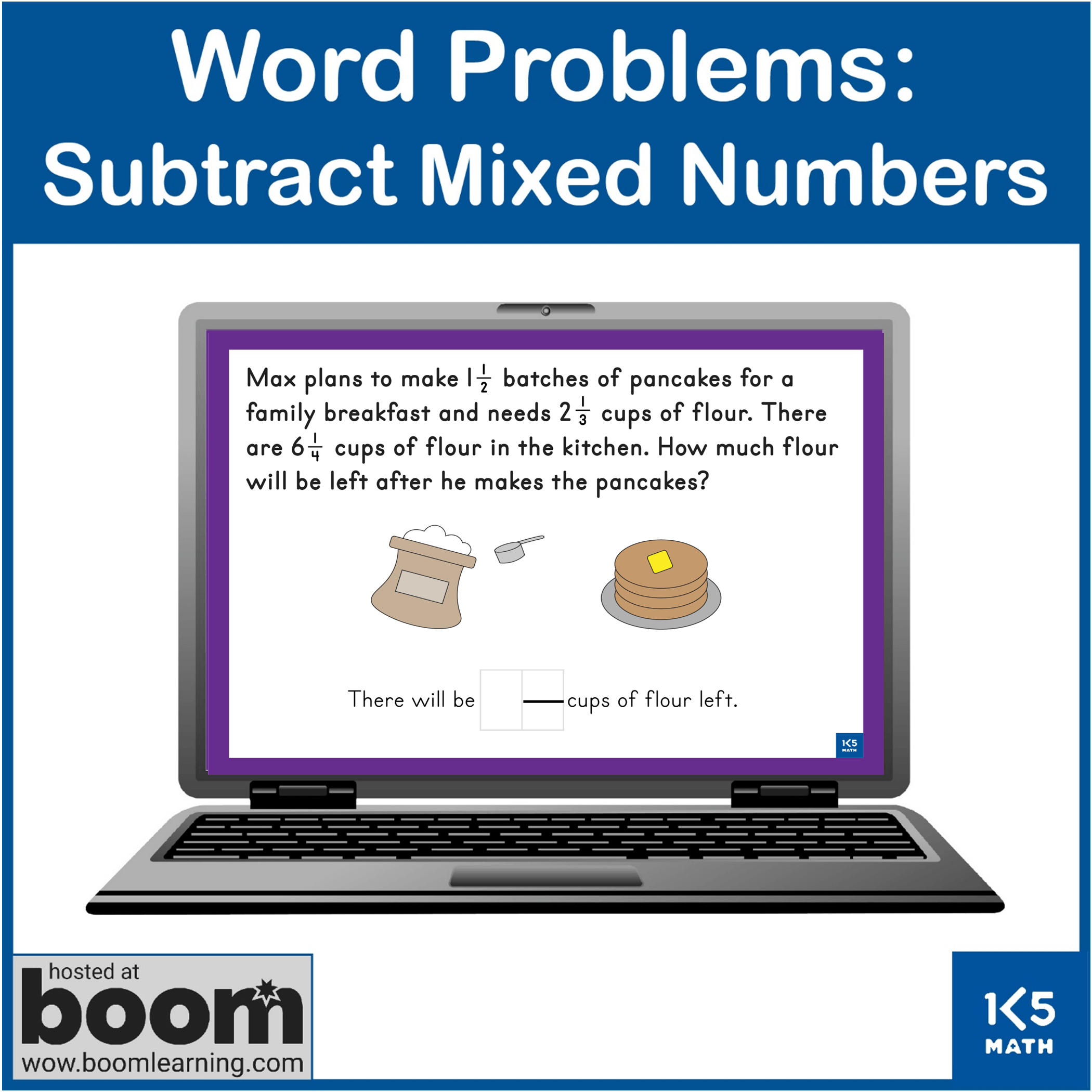 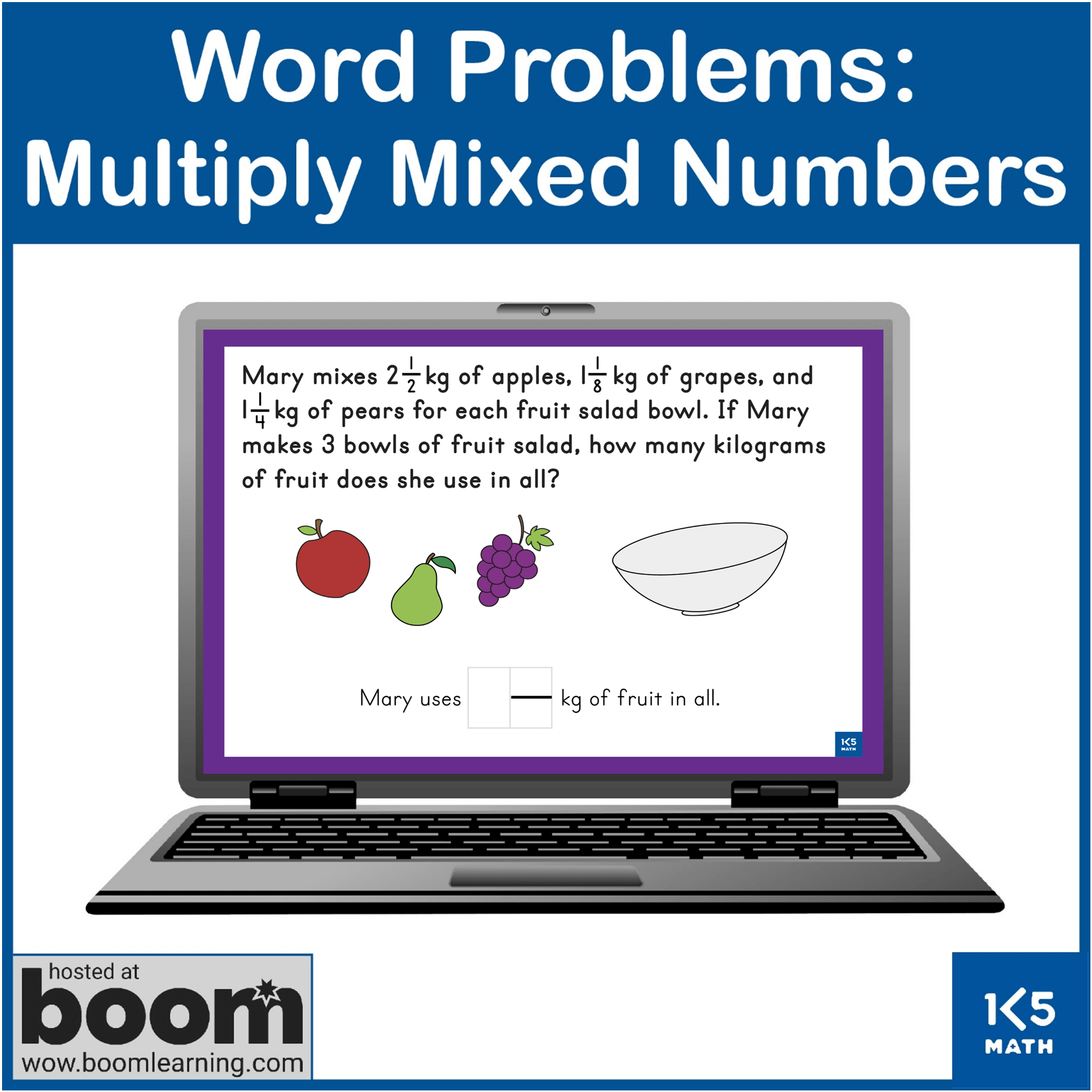 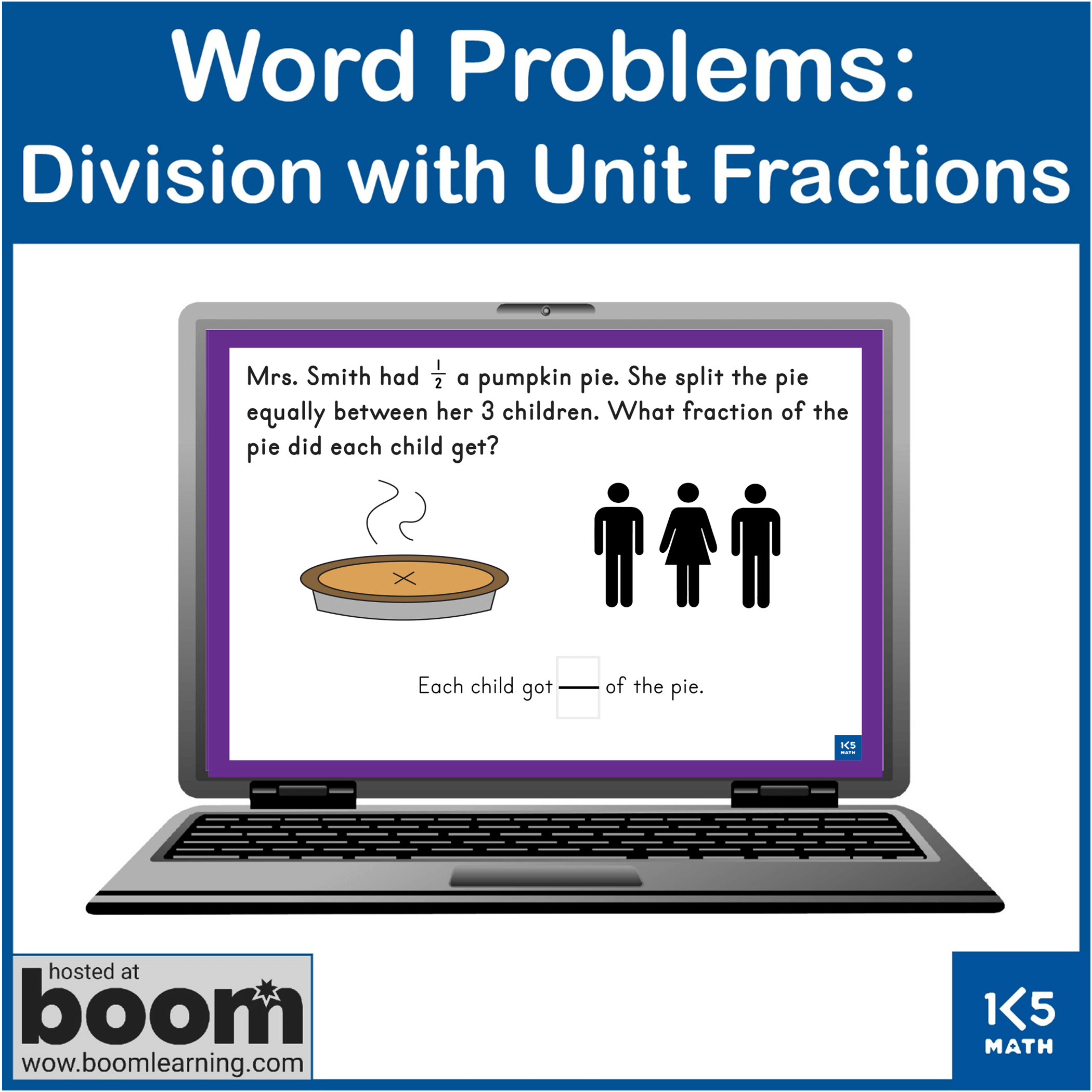